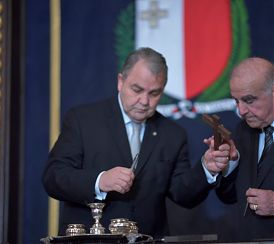 During his first official speech as the new President of the Republic of Malta, George Vella declared that Malta has to work hard to achieve unity and he will work to eradicate divisions in Maltese society. “There undoubtedly remains the need and space for different and divergent opinions, but there needs to prevail a genuine and reciprocal respect.”

Vella was sworn in today as the tenth President of the Republic of Malta in a special sitting of the House of Representatives. His appointment was approved in an unanimous vote by the Maltese Parliament for the next five years.

“As President, I expect this first expression of unity and political maturity, to manifest itself in the coming weeks, as we hold elections for the European Parliament.” He said as a nation, “we are far from perfect, and still have a lot to contribute to leave a better place for upcoming generations. We still have our differences on the way our institutions work and operate, about the rule of law, the powers of administration, and about executive structures. We still carry on our national conscience the black stains of atrocious acts such as the murders of Karin Grech (1977), Raymond Caruana (1986), and Daphne Caruana Galizia (2017). All of this does not befit the peace-loving character of us Maltese”.

Vella referred to other challenges Malta is facing: the reinforcing of the civil liberties, the elimination of all forms of discrimination, the guarantee of women’s rights, the safeguarding of social rights, and the quality of life should prevail for both Maltese and foreign workers as well as for the migrants. Another priority mentioned by the President of Malta is the importance of just and equitable distribution of wealth. “I belief firmly that help is to be provided by way of right, and not as an act of charity or favour.  At the same time, we cannot allow ourselves to think that, thanks to our country’s remarkable economic performance, there is no material poverty among our citizens. This is indeed a challenge, and I take it upon myself to keep up the attention placed on those in need.”

As a medical professional, Vella declared he hope to continue witnessing the respect that has been shown thus far towards the ethical and moral bases of the medical profession, above all respect for life, from its very inception to the individual’s very last breath.

He also spoke about the challenges facing Malta as regards the environement, and said he will recommend rigorous adherence to regulations and scrupulous decision-making in the interest of sustainability, and the ultimate obligation towards future generations.

In a message sent from the President of the Republic of Italy Sergio Mattarella to the newly appointed President of the Republic of Malta, Sergio Matarella described the deep bond that unites the two countries. Matarella said that at a time when the Mediterranean area is facing profound challenges; starting from the migration; it is indispensable to intensify the collaboration between Valletta and Rome with farsightedness and ambition; both on the bilateral level and in the framework of the European Union to ensure that conditions of stability and a shared future full of peace and prosperity emerge in our neighborhood.

Addressing the highest authorities in Malta in an inter-religious ceremony at St. John’s Co-Cathedral, prior to the swearing-in ceremony of the new President of the Republic, Archibishop Charles J. Scicluna insisted on the importance that political leaders seek wisdom so that they can see what is right and act on it,  by investing in the highest good.  “The economic prosperity of a country is placed on a sound foundation depending on how much its leaders seek first and foremost to embrace attitudes linked to what is wise and right. The same can be said for the reputation of the country: it is strengthened and grows depending on the priorities we have when we embrace the values of integrity, justice and solidarity”.

He quoted Pope Francis in his message for the 2019 Day of Peace: “The thirst for power at any price leads to abuses and injustice. Politics is an essential means of building human community and institutions, but when political life is not seen as a form of service to society as a whole, it can become a means of oppression, marginalisation and even destruction”.

Archbishop Scicluna warned that if the first or only thing the political leaders seek is gain or profits, democracy becomes a kerdocracy (a society based on a mad rush after profit) and from there on it is easy to slide into a kleptocracy (a society where power is in the hands of the greediest).  “In fact political office and political responsibility thus constantly challenge those called to the service of their country to make every effort to protect those who live there and to create the conditions for a worthy and just future. If exercised with basic respect for the life, freedom and dignity of persons, political life can indeed become an outstanding form of charity”.

Archbishop Scicluna declared every election and re-election, and every stage of public life, is an opportunity to return to the original points of reference that inspire justice and law. “One thing is certain: good politics is at the service of peace. It respects and promotes fundamental human rights, which are at the same time mutual obligations, enabling a bond of trust and gratitude to be forged between present and future generations”.