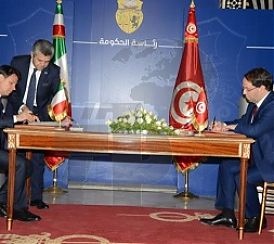 Last Tuesday Tunisian Prime Minister Youssef Chahed urged Italy, as a member of the European
Union (EU), to support Tunisia’s request to be removed from the European list of high-risk money laundering and funding countries of terrorism.

The meetings between Italian and Tunisian representatives were held during the visit to Tunis by Italian Prime Minister Giuseppe Conte and a large delegation of Ministers, for the signing of
seven cooperation agreements between Italy and Tunisia.

“Tunisia relies on Italian support to help it obtain a favorable EU response, to its request to introduce a common management of the annual tariff quota for olive oil, in order to promote the
export of Tunisian olive on the European market “, added Youssef Chahed at the closure of the Tunisian-Italian economic forum.

Addressing the Italian Prime Minister Giuseppe Conte, the head of government expressed the desire to see the EU effectively implement the principles that govern the negotiations under the free trade agreement (ALECA). It also urged the Italian government to support his government in its efforts to increase the number of Italian tourists in Tunisia, which in his opinion do not yet meet
the ambitions.

For his part, the Italian Prime Minister Giuseppe Conte expressed the desire to strengthen economic cooperation with Tunisia, in particular in terms of investments in order to provide social
stability and promote growth to stem the flow of irregular migration. ” Italy wants to implement all the favorable conditions for an advantageous collaboration with Tunisia in many sectors,
including mainly infrastructure, energy, industry and technology, “said Conte, recalling that 900 Italian companies are currently established in Tunisia, generating around 68 thousand jobs. “This
number makes Italy the second largest foreign investor in Tunisia,” said the Italian Prime Minister.
The head of the Tunisian government Chahed Youssef and Giuseppe Conte, President of the Italian Council of Ministers signed the joint declaration of the first meeting of the strategic Superior Council between Tunisia and Italy, focusing on the prospects for bilateral partnership for the period to come.

Another agreement was signed between Tunisia and Italy in order to strengthen the
Elmed electricity transmission infrastructure to promote energy exchanges between Europe and North Africa. According to Prime Minister Youssef Chahed, this agreement will allow the Tunisian
electricity and gas company and the Italian energy company to effectively start the project by 2023.

Financed by the European Union for 600 million euro, the project received a first tranche, with an Italian contribution of 5 million euro to develop the studies necessary for the realization
of this project.
Furthermore, an agreement was signed between Tunisia and Italy for the conversion of a second quota of Tunisian debts into investment projects worth 25 million euros from 2020 to finance part of the integrated development project at El Mohdeth in the delegation of El Faouar. This project consists of the development of 1000 hectares for palm plantation with a budget of 155 million dinars. Italy has paid 500 thousand euro to finance the specific study of this project.

Finally, the Tunisian foreign minister Khemaies Jhinaoui had a meeting with his Italian counterpart, Enzo Moavero During a joint press conference held after the meeting, Jhinaoui said: “The focus was on the need to follow up on the decisions of the Italian-Tunisian High Council for the