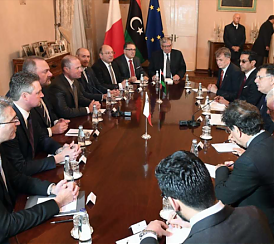 Fajez al-Sarraj government is recognized by the United Nations.  During the discussions with the Maltese government, said he discussed the present situation in Libya, and expressed the hope that the Maltese Government assists him to overcome the challenges facing his country.

The President of Malta George Vella has already expressed his grave concern at the unfolding situation in Libya. Last April, few days after he took office, Vella said the situation in Libya shows the hypocrisy of the international community for not taking a decisive action as fighting engulfs Libya. While he referred to the high number of casualties, Vella appealed to a political solution in order to safeguard the best interest of the Libyan people and to avoid a human disaster.

General commander Khalifa Haftar who leads the Libyan National Army, based in Eastern Libya is refusing to stop military attacks on Tripoli and is accused by the United Nations of looking to divide Libya. The attacks on Tripoli began in April and General Haftar is looking to gain control of the Libyan capital. By now, it is estimated that over 500 people and 75,000 civilians fled their homes because of the fighting.