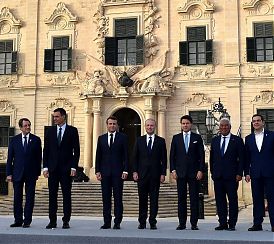 Leaders from the ‘EUMed7’ countries—Cyprus, France, Greece, Italy, Portugal and Spain—were in Malta today for the sixth Southern EU Countries Summit hosted by Maltese Prime Minister Joseph Muscat. The half-day summit included a roundtable discussion on opportunities for the region, plus issues of common concern, from climate change to migration and the EU Budget.

The leaders agreed about the need of more comprehensive approach on the issue of migration; insisting on identifying channels for legal migration, better control of the European Union’s external borders, the need of a new reform and common European asylum system to guarantee a fair burdern sharing as a show of solidarity amongst member states, more efforts to fight the illegal traffickers of migrants, a properly financed common migration policy and a call for all vessels operating in the Mediterranean to respect the international laws.

During a joint press conference in Valletta, Giuseppe Conte, the Italian Prime Minister Giuseppe Conte appealed for more European economic growth, also through public investments instead of securing economic stability through austerity measures. He declared that Italy does not need to take corrective measures. The European Commission is ready to start an excessive deficit procedure against Italy, if  the Italian government does not take the necessary actions. The European Commission found that Italy’s debt stood at more than 132 per cent of GDP in 2018, far above the European Union’s 6o percent limit.

During the first session of the summit, the Prime Minister of Malta said “being an island in the middle of the Mediterranean, and a bridge between Europe and Africa, Malta has always been perfectly placed to act as an interlocutor for debate on regional issues”, while noting the aim was to coordinate ways to work together, recorded in the official declaration signed after the summit.

“The timing of this summit is also crucial”, the Maltese Prime Minister said as he opened the roundtable discussions, stating how those present needed to be part of the decisions being taken about the future of the EU. “The EU is expected to, and should, play a meaningful global role by stimulating stability and growth.”

“Our work needs to be guided by a set of principles that will shape the future of Europe in the world. Principles which include putting the EU’s social agenda at the forefront of the region’s work, to further promote gender equality and LGBTIQ rights.”

He said economic growth, which leads to more and better jobs, must also be at the centre of the alliance’s policies. “Which is why our region needs to be at the forefront of innovation, a hotbed for the creation, development and roll-out of emerging citizen-centric technologies, designed to enhance socio-economic wellbeing.”

With this in mind, the Prime Minister announced a Summit follow up meeting—the Telecommunications Ministerial Conference—which will be held in Malta next year.

However, Prime Minister Muscat added that no amount of economic prosperity can be lasting without tackling the effects of accelerating climate change in the Mediterranean region. “We need to ensure we intensify our work on the EU’s climate strategy, mindful of regional specificities, to implement the objectives we all agreed to in the Paris Agreement.”

He said energy security is also a priority. “We need a well-connected Mediterranean region as a precondition for a fully functioning energy market aimed at sustainability, affordability, and security of supply.”

As is regional stability, with an unstable Libya being a direct threat. “Our call for ceasefire and the engagement with the United Nations to ensure a full and comprehensive cessation of hostilities is a first step in the long process of rebuilding Libya.” He also commended the work of the Libyan Coast Guard, who had been effective in their work.

Stability in the rest of Africa is also crucial when it comes to migration issues. “Our geographical location makes us susceptible to persistent migratory pressures. Progress has been made only through the goodwill of a number of states willing to share the responsibility of this phenomenon.”

However, he added, “we need to look at a more permanent mechanism within the context of a fully functioning migration policy, based on a balance of responsibility and solidarity. Crucial in this regard is the need to ensure that all vessels operating in the Mediterranean respect the applicable international law.”

After signing the declaration, the leaders addressed the press before going to dinner to continue discussions privately.