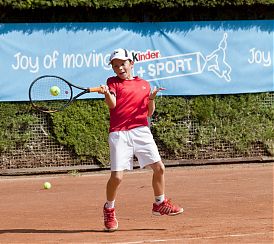 The Kinder+Sport Tennis Trophy is back for the third year in a row. This time, the international tennis tournament for children aged nine to 12 is welcoming two new countries alongside the ones from last year, for an overall total of 13 countries playing in 172 tournaments.
The first phase began on 2 February in the town of Alba, in Italy, with the “Tennis Trophy Fit – Kinder+Sport”. This was followed by a tournament on 22 March in Austria. The next stop will be held in Luxembourg at the Tennis Club Husen from 12 to 21 July. Then others in Belarus, Bulgaria, Germany, Hungary, Ireland, Israel, Malta, Monaco, Poland and the Ukraine.
The winners of these will go on to the International Masters, the finals of which will be held from 17 to 20 October at the exclusive Monte Carlo Country Club, site of the ATP Tour.
As an integral part of Kinder+Sport Joy of Moving – the Ferrero Group international Social Responsibility project set up to get children and families involved in fun-filled motor activity – the Kinder+Sport Tennis Trophy is more than an athletic competition. The trophy focuses on values like trust in yourself and others, integration, respect and friendship.
The guiding principle of the tournament is that matches are played without referees, so that children can put their honesty and integrity to the test on the court. In keeping with this principle, the Fair Play Trophy is awarded at the end of each national tournament to recognise the young tennis player who has stood out the most for their honesty and good sportsmanship.
The initiative began in Italy in 2006. It was the brainchild of tennis star Rita Grande and Kinder+Sport Joy of Moving. In recent years, it has become more international in scope, helping spread the concept of an active lifestyle to younger generations. In past editions, the finalists also had the opportunity to meet world-renowned tennis idols Francesca Schiavone, Flavia Pennetta, Sara Errani, Jo-Wilfried Tsonga, Fabio Fognini, Simone Bolelli, Corrado Barazzutti and Nicola Pietrangeli, as well as coach Patrick Mouratoglou.

At Kinder, we believe that a happy child today will make a better adult tomorrow and that is why we have always aimed to bring little but important moments of joy to children and families around the world.
However, not everyone knows that for years Kinder has also been committed to another important objective: to bring joy to children through moving, encouraging their natural inclination to be active, move and play.

That is why we started Kinder+Sport Joy of Moving, an international Ferrero Group Social Responsibility project.
To date the Kinder +Sport Joy of Moving project has inspired four million children and their families in 30 countries around the world to get active, enjoy moving, and develop life skills in an engaging and joyful way. At the heart of the project is the strong belief that a positive attitude towards movement will make today’s children, better adults tomorrow.

The initiatives of this project are inspired by Joy of Moving: an innovative, scientifically recognized educational method. The Joy of Moving methodology aims to get children moving, through play whilst also developing key skills in four major areas: physical fitness, motor coordination, cognitive function and creativity, life skills. Joy of Moving instinctively shifts the focus from performance to fun, from competition to collaboration.

Irrespective of the sports discipline, the playing field and the level of performance or ability of the child, Kinder+ Sport lets the joy of movement win.
Kinder+Sport Joy of Moving organizes and supports physical education programs in and out of schools, sporting events for children and school competitions with the aim to guarantee that movement is above all a joy for children. Kinder + Sport Joy of Moving also runs multidisciplinary events to bring children closer to sport, collaborates with athletes and former champions to inspire, and supports research projects focused on the benefits of an active lifestyle.