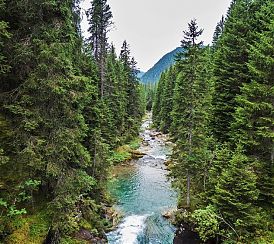 The sound of the violins where the Vaia storm has fallen. Right there – in the forest of violins in Val Veneggia in the park of Paneveggio – where the wood for the Stradivari instruments was born – the strings with their melody will convey a message of life and hope. The event “The violins, the Voices of the Alps” will be staged on Saturday 13 August, at 3 pm, in Val Venegia, as part of the Italian presidency of Eusalp 2019 coordinated by the Lombardy Region in collaboration with the Autonomous Province of Trento and the South Tyrol Region . The strategy of the Alps unites Italy with France, Germany, Austria, Slovenia, Switzerland and Liechtenstein.

With this initiative we want to promote the themes at the center of the Italian presidency Eusalp with the green economy that sees craftsmanship – especially the artistic one – as a great development engine for the entire Alpine area. It also aims to highlight the contribution that a strong circular economy can make to the development of the entire mountain and Po Valley area.

The protagonists will be the youth of the youth orchestra of the Cremona Conservatory “Claudio Monteverdi” with music by Vivaldi, Bach, Pachelbel and Mozart. The orchestra also includes young people who attend the violin making school in Cremona. At the end of the concert, the president of Ersaf Lombardia will donate to the Autonomous Province of Trento some spruce plants from the nursery of Curno, in the Lombardy Region . The public will be able to visit the exhibition and the Bottega del Liutaio at the edge of the forest with a demonstration by the maestro Sandro Asinari, vice president of the Stradivari Violinmakers Consortium of Cremona.

“Our planet can no longer support a development model based on intensive resource consumption: we must build a development model based on sustainability. This need becomes even more evident in the territories that are concentrated around the Alpine arc – the councillor of Lombardy Region for Environment and Climate Raffaele Cattaneo explained – The wisdom of the Alpine regions, like Trentino, together with a strong tradition has been able to understand the challenges of the circular economy and sustainability over time and has allowed this territory to react to the devastation that struck it. “

“The environment is the engine of the social and economic development of Trentino and of the entire Alpine region”  the Vice President of the Province Mario Tonina said, who highlighed how “the ability of the Trentino population to react after the devastation caused by bad weather is a distinctive  trait to be very proud of ”.