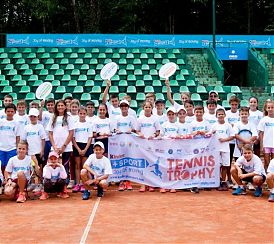 The Kinder+Sport Tennis Trophy is back for the third year in a row. This time, the international tennis tournament for children aged nine to 12 is welcoming two new countries alongside the ones from last year, for an overall total of 13 countries playing in 172 tournaments.
The first phase began on 2 February in the town of Alba, in Italy, with the “Tennis Trophy Fit – Kinder+Sport”. The last phase of the tournament took place in Sofia at the Bulgarian National Tennis Center in this days.

The winners of the tournament are:

Then others tournaments will be in Belarus, Germany, Hungary, Ireland, Israel, Malta, Monaco, Poland and the Ukraine.
The winners of these will go on to the International Masters, the finals of which will be held from 17 to 20 October at the exclusive Monte Carlo Country Club, site of the ATP Tour.
As an integral part of Kinder+Sport Joy of Moving – the Ferrero Group international Social Responsibility project set up to get children and families involved in fun-filled motor activity – the Kinder+Sport Tennis Trophy is more than an athletic competition. The trophy focuses on values like trust in yourself and others, integration, respect and friendship.
The guiding principle of the tournament is that matches are played without referees, so that children can put their honesty and integrity to the test on the court. In keeping with this principle, the Fair Play Trophy is awarded at the end of each national tournament to recognise the young tennis player who has stood out the most for their honesty and good sportsmanship.
The initiative began in Italy in 2006. It was the brainchild of tennis star Rita Grande and Kinder+Sport Joy of Moving. In recent years, it has become more international in scope, helping spread the concept of an active lifestyle to younger generations. In past editions, the finalists also had the opportunity to meet world-renowned tennis idols Francesca Schiavone, Flavia Pennetta, Sara Errani, Jo-Wilfried Tsonga, Fabio Fognini, Simone Bolelli, Corrado Barazzutti and Nicola Pietrangeli, as well as coach Patrick Mouratoglou.
https://www.tennistrophy.com
(ITALPRESS/MNA).