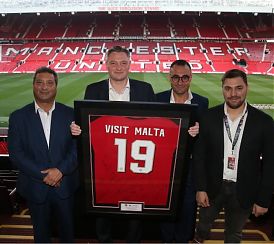 The Malta Tourism Authority and the English football team of Manchester United have reached a historic agreement that will expose Malta to new markets in America and Asia.

In a visit to Old Trafford, the Minister for Tourism, Konrad Mizzi, said that this partnership with the English team, which has more than a billion supporters around the world, is part of the Government’s strategy to promote Malta as the destination of the Mediterranean.

On Saturday, Malta’s name will start appearing at Old Trafford, which is among the largest stadiums in England with a capacity of 76,000 spectators and further promotion will appear on the social media and other websites.

This is possible through a partnership agreement for the next three years between the Malta Tourism Authority and Manchester United; one of the football teams followed by more than a billion supporters worldwide.

In a visit to the Training Complex of Manchester United, the Minister for Tourism, Konrad Mizzi, said that through this partnership, Malta will increase its visibility tremendously.

The Chairman of the Malta Tourism Authority, Gavin Gulia, described  this partnership as historic for Malta. “It will serve as a showcase for Malta because Manchester United are known all over the world, and Malta will be promoted worldwide. Tourism is advertising, marketing, and of course this is an important to promote our country and the most important ever had in the history the Malta Tourims Authority. “

First among the United football players intending to visit Malta for the first time is the Spanish international, Juan Mata. “I’ve never been in Malta but I love to travel. I love to discover new countries and new cultures and yes of course, I would like to go at some point to relax and enjoy, probably in summer. Nice food, nice weather and yes, I’m looking forward to it.”

The English club legend, Bryan Robson, has learned about Malta because his wife’s parents had a residence in Msida. “First I went to Malta I was sort of 19 years old so over the last 10 years, I’ve actually went back there. I’ve had some great holidays over in Malta. The beaches are great. Over the years, the hotels have really improved. There’s great bars and restaurants. The weather is always really good, so it’s great island to visit”.