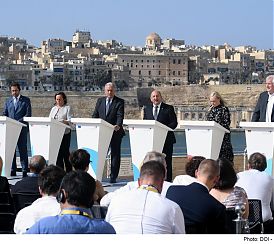 Home Affairs Ministers from five European Union countries together with the European Commissioner responsible for migration Dimitris Avramopulos agreed in Malta on a system to address the disembarkation and relocation of migrants rescued in the Mediterranean Sea.

The Ministers of Malta, Italy, France, Germany and Finland which holds the European Union council presidency, said that this agreement would be presented to the rest of the European Union states in a meeting of the Interior ministers to be held in Luxembourg in October 8. During a press conference in Fort St Angelo, it was confirmed that this agreement is temporary until a permanent procedure comes into force.

The process requires the approval of the majority of the EU countries and then an operational system will be drawn up. The Ministers discussed measures how to control vessels owned by non-governmental organizations; including licensing regulations to ships capable to rescue at sea.

According to the agreement, not only Malta and Italy, but also other member states who voluntarily choose to help in the migration crisis will be involved in the disembarkation process of migrants. As regards the migrant reception centers, once a member state is under pressure, a new mechanism will come into force so that the burden will be shared by other EU states by taking the rescued migrants. The Ministers agreed that countries who are under stress in view of migratory flows are not to be left alone, and a threshold mechanism is to be implemented.