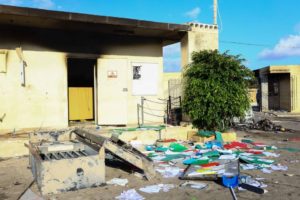 Around 1,200 migrants took control of ?al Far detention centre in Malta, after a riot took place between Sunday and Monday night. Last night’s serious incidents are the latest in a series of violent protests organized by migrants detained in various centres in the Southern part of the island.
Migrants are asking for freedom and justice, while opposing the detention period until they are transfered to other European countries. All detention centres in Malta are under pressure. Hundred of migrants were allowed by the Maltese government to desembark in Malta during the summer months.
In last night’s attacks, the administrative offices where all documents which presumably contain personal information about the identity of the migrants were burned, together with the guardroom and several cars of professionals employed with the public agency in charge of the migrants’ needs.
A police officer was slightly injured and a police car was also damaged as migrants threw stones and other heavy objects during the riot.
A group of female migrants including children were caught in the violence inside the detention centre.
According to the Police, the protest started at 10 in the evening. A number of district police officers and others from the Rapid Intervention Unit were called on site to control the situation. While the building is surrounded by the Armed Forces of Malta to prevent any migrant from escaping, the Police are still investigating the riot and a number of migrants are expected to be arraigned in court.
(ITALPRESS/MNA)