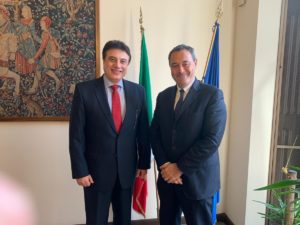 The president of the Regulatory Authority for Energy, Networks and the Environment, Stefano Besseghini, met Karem Mahmoud, president of the Egyptian gas regulation authority, GASREG, in Milan. The meeting was made possible thanks to the joint membership of MEDREG, the Association of Energy Authorities in the Mediterranean, of which ARERA is the founder and Permanent Vice President.
GASREG was established in 2017 and has among its various objectives those of monitoring the functioning of the Egyptian gas market, encouraging new investments, regulating activities, promoting competition among operators, allowing access to third parties on a fair and non discriminatory condition. Among the actions planned for the start-up of the Egyptian free market, also downstream of the recent gas discoveries, GASREG intends to collaborate with ARERA to promote the separation of the supply chain to today vertically integrated and the transparent access of third parties to the infrastructures.
Next meeting is the first MEDREG “Presidents meeting” scheduled for December 10 in Rome.
(ITALPRESS/MNA).