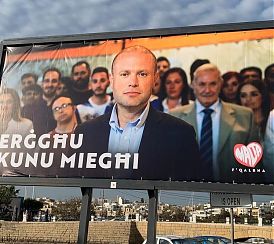 One week ahead of the European Parliamentary elections in Malta, the gap between the Labour Party of Prime Minister Joseph Muscat and the Nationalist Party in Opposition led by Adrian Delia is 19.6 percent for the Labour Party. With an expected turnout of about 70 percent, this will result 50,000 votes in favour of the Labour Party.

The prediction of the outcome of the European Parliament elections in Malta is, 56.9 per cent for the Labour Party, the Nationalist Party will get 37.3 percent of the votes, the green party Alternattiva Demokratika will get 2 percent, 1.7 percent vote will go to the far-right party Imperium Europa, 1.1 per cent for the Democratic Party and 1.1 per cent vote for other parties and independent candidates.

According to the latest poll, the Labour Party managed to increase the gap with the Nationalist Party by 8.2 per cent over the last election. The Labour Party has increased the gap mainly because there are more Nationalists that say will not go to vote, or ready to vote for other parties. The Maltese vote less for the European Parliament election when compared to the general election. Indeed the turnout usually is about 75% of the eligible voters.

The recent arrest of two Armed Forces of Malta soldiers charged with the cold-blooded murder of a migrant from Ivory Coast dominated the election campaign over the weekend. The Opposition has requested for an independent inquiry into how one of the accused was engaged in the Armed Forces of Malta while serving a bail sentence. Meanwhile, Prime Minister Joseph Muscat appealed to the Maltese society to embrace integration of foreigners including migrants.