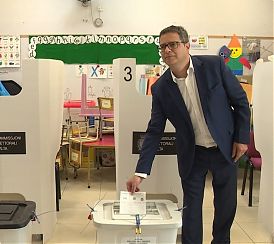 The Labour Party has 14 candidates, there are 10 candidates on the Nationalist Party ticket, the Democratic Party is contesting with 4 candidates. The Green Party (Alternattiva Demokratika), the Alliance for Change (Alleanza Bidla) and the Maltese Patriotic Movement (Moviment Patrijotti Maltin) have two candidates each. There are seven more representing other small parties or contesting as independent candidates.

Today, the Maltese are also voting to elect new administrations in 68 Local Councils.  341,000 are eligible to vote in the local elections.

This is the first time in which 16 year olds are taking part in a nationwide election. All polling stations opened at 7am and will remain open until 10pm. The vote counting will start on Sunday morning and an electronic vote counting system will give an early indication of which political party gained the most votes.

Citizens from member states who reside in Malta and registered with the Electoral Commission can also vote for Maltese candidates contesting the European elections. There are 18,375 who can do so, mostly British with just over 6,000. After the British, the largest amount of foreigners who chose to vote in Malta, are the Italians with more than 4,000; followed by Bulgarians, Germans and Romanians. Only one national from Luxembourg who resides in Malta registered to vote here.

Considered among the largest democratic exercises in the world, the European Parliament elections take place in 28 member states of the European Union on various dates between Thursday and Sunday. Like Malta, today voting is underway in three other countries: Latvia, Slovakia and the Czech Republic. The majority of countries vote tomorrow. A total of 751 Europarliamentarians are to be elected. More than 400 million people are eligible to vote.

The last polling stations close at 11pm tomorrow in Italy. In Malta, the Electoral Commission estimates that up to that time the whole counting process will be concluded and will be able to announce the official result.