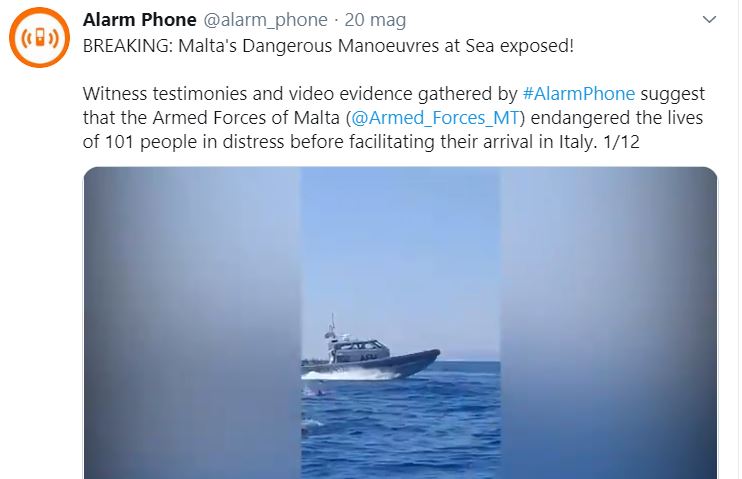 The Maltese government is contesting reports and video evidence gathered by the non-governmental organisation ‘Alarmphone’ where it is being alleged that during the Easter weekend, the Armed Forces of Malta provided equipment to a group of migrants to reach the Italian shores, instead of rescuing them to the safest harbour. According to ‘Alarmphone’ the Armed Forces of Malta first threatened migrants onboard the boat in Malta’s search and rescue zone that they will take them back to Libya, then they gave them petrol and an engine to go to Italy. The Maltese government and the Maltese Home Affairs Minister have not issued any public statements to deny these allegations.
‘Alarmphone’ describes the Easter weekend “as violent and deadly in the Mediterranean Sea.” Shortly after Italy and Malta declared their harbours ‘unsafe’ and closed for migrant landings due to restrictive measures to contain COVID-19, migrant boats were left adrift in European Search and Rescue zones while being surveilled by European authorities from the air. According to the NGO, several migrants in distress were left to die, starving or drowning while beling closely watched by Malta and Frontex; the EU Border and Coast Guard Agency.
According to ‘Alarmphone’, between 10 and 13 April 2020, four boats loaded with migrants reached out for assistance.
One boat with 47 people on board was left adrift in the Maltese Search and Reascue zone for several days. Only due to the intervention of the NGO Aita Mari, the migrants were rescued on 13 April.
A second boat with 77 migrants onboard arrived autonomously in Portopalo di Capopassero, Sicily, on 13 April.
A third boat with 63 migrants on board was illegally pushed back to Libya on 14/15 April. Alarmphone reported that 12 migrants died due to Malta’s failure to assist and to bring them to a place of safety.
A fourth boat with 101 migrants onboard reached Pozzallo, Sicily on 12 April. The migrants who were in distress had reported that there were 85 people onboard when they reached out to the NGO Alarmphone. With regards to the fourth boat, the NGO stated that many wondered how a flimsy, overcrowded and unseaworthy rubber boat had been able to navigate about 500 kilometres from Zliten, east of Tripoli in Libya, all the way to Pozzallo, south of Sicily in Italy. But according to survivors, those who facilitated the arrival of the boat to Italy were the Armed Forces of Malta. A few weeks after their arrival in Italy, on May, 3 some of the 101 survivors re-connected with Alarmphone and shed light on what happened to them during their journey across the sea. The video evidence they shared as well as their testimonies raise grave concerns about the behaviour of the Armed Forces of Malta. After failing to assist, and even directly endangering and threatening the people in distress, the survivor testimonies highlight how the Armed Forces of Malta provided fuel, an engine, and GPS coordinates to the distressed and instructed them to continue to Italy – practices commonly associated with smuggling operations.
Meanwhile, Italian Home Affairs minister Luciana Lamorgese has asked the Maltese government for an explanation over the recent stories purportedly showing that the Armed Forces of Malta pushed migrants towards Italy when the rescue was in Maltese territorial waters. While being interviewed in a current affairs programme ‘Che tempo che fa’ on RAI 2, Lamorgese said that on seeing the images, her reaction was strong as well as immediate. “I saw the video and immediately sent it to the Maltese Home Affairs minister. It seems absurd to me that this country is embroiled in such a situation. The Minister told me that matters were not exactly as the video was showing. I flagged the matter up to the EU Commission.”
In another development, around 300 migrants were rescued in the past days by the Maltese authorities, but they were not granted permission to desembark. The migrants are onboard chartered tourist harbour cruise boats outside the Maltese territorial waters. According to local reports, the Maltese government is paying €3,000 every day for three boats to the owner of the cruise boats. The International Organization for Migration (IOM), and the UN Refugee Agency (UNHCR), have called on Malta and the other European States to speed efforts to bring the rescued migrants to safety.
The Maltese Prime Minister Robert Abela has told the European Union that since Malta’s airport amd harbours have been closed to tourists, the authorities will not open to migrants. The Maltese government is also insisting with the European Union, that it will keep the rescued migrants outside the territorial waters until an agreement is reached on relocation to other European countries. However, the Maltese government confirmed that last Friday, a group of 19 migrants have been brought to Malta for humanitarian reasons. The group included children, their parents and pregnant women.
The Maltese Foreign Minister Evarist Bartolo said that Malta’s migration centers are holding twice the number of people they were designed for. “We want to protect the rights of people seeking protection, but we can only do so much,” Bartolo said, referring to the EU. “We are being left alone. Words of sympathy are not enough, we need practical help.” According to Bartolo, only 8% of migrant arrivals had been distributed to the EU over the years. Of 1,500 this year, only France and Portugal had pledged to take migrants, just 36.
Meanwhile, the humanitarian NGO Alarmphone has lost contact with another boat carrying 78 migrants. Amongst these migrants, there are two women and four children. According to Alarmphone, the boat is currently in the Maltese search and rescue zone and the Maltese authorities are refusing to provide further information.