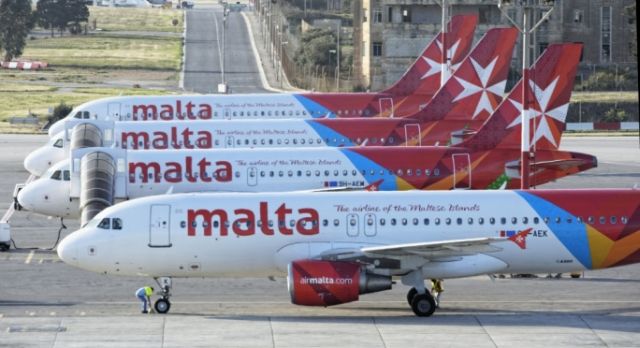 The Maltese national airline, Air Malta has announced that it has fired 69 pilots as they are considered redundant by the company. Air Malta confirmed that talks with the pilots union, ALPA, had failed.
The Maltese Government requested the pilots to follow the agreement reached with the cabin crew union, but the pilot’s union did not accept the proposed agreement offered by Air Malta.
Air Malta claimed that as the company’s revenue fell sharply with the impact of the Covid-19 pandemic, and the airline had no choice but to make half of its pilots redundant.
The airline also claimed that although other unions representing various workers within the company understood the need to accept the changes, according to Air Malta, ALPA was making unreasonable demands. ALPA had demanded that its members start receiving half the salary but this was unacceptable to Air Malta.
The Government in a statement said that the position taken by ALPA led to &quot;decisions that were not desirable but necessary&quot;. The government also said that ALPA’s request for an early retirement scheme would cost €73 million, an average of €700,000 per pilot.
The Ministry for the Economy also stated that the national airline “held several long meetings with the Pilots’
Union in order to safeguard its sustainability and viability”. The Minister for the Economy responsible for Air Malta, Silvio Schembri, said that “ALPA’s actions tried to stifle Airmalta’s operation as the requests made were unreasonable at a time when the airline’s financial income decreased substanially due to the Covid-19 pandemic”.
Commercial flights from Malta International airport are due to restart on July, 1. Air Malta is expected to operate only five aircrafts of its fleet until summer 2021.